Bring on the Bad Guys!

Call them whatever you want, they can leave a bad feeling for other characters. Whether it's the dragon Smaug from J.R.R. Tolkein's The Hobbit or The Flash villain, the telepathic simian Gorrila Grodd. More times we think of the hero as the mover and shaker of the story, the protagonist. However, it's the antagonist who drives the plot of the story.

Call them whatever you want, they can leave a bad feeling for other characters. Whether it's the dragon Smaug from J.R.R. Tolkein's The Hobbit or The Flash villain, the telepathic simian Gorrila Grodd. More times we think of the hero as the mover and shaker of the story, the protagonist. However, it's the antagonist who drives the plot of the story.

The villain/antagonist is a character of the story the protagonist stands against. He's the one with the plan. The character lives to achieve his own goals like revenge, power, recognition, etc. The hero is there to thwart the villain. Spider-Man swings around the city on watch for any action from a bank robber or Electro rampaging through Time Square. Batman, on the other hand, is either patrolling Gotham City or sitting in the Batcave searching the whereabouts of one of his foes.

Of course, readers need a protagonist that they can connect with but as writers we have to provide an antagonist  they can understand and sympathize with. We now move on to the sympathetic villains. They're the ones with the goals which they do anything to achieve and are shaped by a tragic moment in their lives or their own sensiblities. The following examples:

Magneto: Master of Magnetism. What makes him a sympathetic baddie? As a survivor of the Holocaust, Erik Lehnsherr lost his family during that time and has seen mankind's capacity for hatred and violence. His "by any means necessary" mindset makes him the Malcolm X of mutantkind to Professor X's Dr. Martin Luther King. 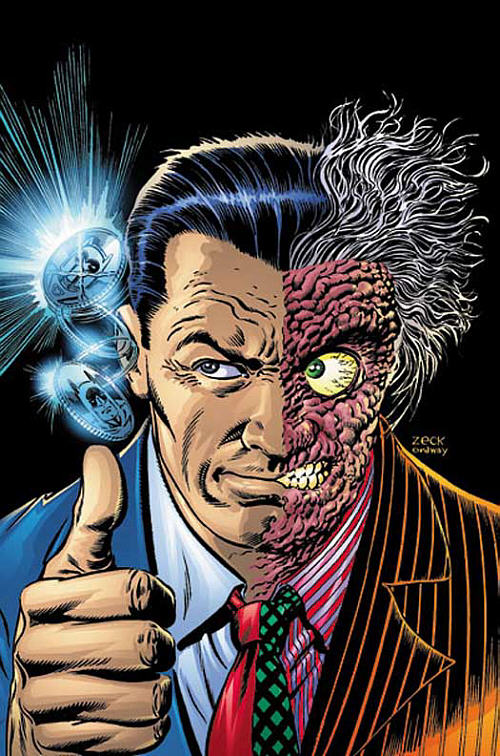 Two-Face. Harvey Dent was Gotham's D.A. with a dark secret: A split personality spawned from childhood abuse and hardship. After a gangster threw acid in his face during a trial, the left side of his face was scarred. However, the psychological and physical trauma won out over Dent creating the violent alter-ego influencing his other half. Not being able to tell right from wrong, Two-Face leaves his decisions to the flip of a coin.

The Lizard. Dr. Curt Connors was a genetic biologist who researched the ability of certain reptiles to regrow missing limbs, partially to regrow his missing right arm. After experimenting on himself, he became a lizard monster, and has occasionally clashed with Spider-Man. Although he's helped the wall-crawler on scientific occasions, Connors is a victim of his own sensible ambitions.

The villain's motivations and point of view depend on the villain himself or those close to him. Plus, it's a writer's duty to show the reader what made them what they are. For those who are having a hard time creating the bad guy of their story, here's an exercise from *Writing for Comics & Graphic Novels with Peter David.

Here are the steps.

We can all create that main character everyone can love but the challenging task of writing fiction is creating a villain readers will hate, or feel for. As Mr. David puts it: "Everyone, even the most hardened criminal on death row, has reasons for his or her actions."